How a Family of Navy Veterans Overcame Odds to Find Stability 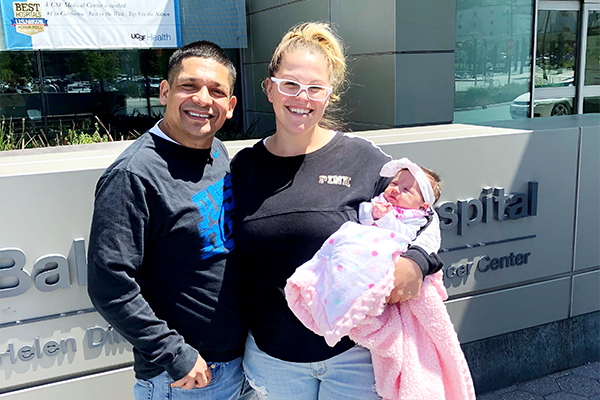 Michael Gonzales served in the U.S. Navy from 2001-2005 and was twice deployed to the Persian Gulf in support of Operation Iraqi Freedom. Michael’s first deployment was during the invasion of Iraq in 2003 and his naval unit covered the Tigris and Euphrates Rivers performing search and seizure missions that captured key Iraqi oil platforms.

After his military service, Michael returned to his native San Diego. His transition was very difficult and he found himself dealing with PTSD and alcoholism. After being incarcerated for minor offenses related to alcoholism, Michael heard about the resources and programs at the San Diego VA and decided to get some help. He enrolled in the APSIRE Center, a veteran residential rehabilitation treatment program, and worked with VA counselors to secure stable housing and achieve sobriety.

During Michael’s recovery, he met and began dating another U.S. Navy veteran, Leann Patrick. Leann was a former nuclear engineer and had recently been medically retired from the U.S. Navy after 12 years of service. After dating for a few months, Michael and Leann fell in love and moved in together. Leann then began to encourage Michael to reach out to his estranged teenage son to try and rekindle their father-son relationship.

Not too long after reuniting with his son, Michael found out that he and Leann were to become parents of a baby girl. The young couple was overjoyed at hearing this news. However, this excitement was short-lived, as the parents-to-be found out at 20 weeks that their daughter had a congenital heart condition and doctors were unsure if she would survive.

Cardiac specialists advised the young couple to seek care at UCSF Medical Center, which is a world leader in performing complex surgeries, including the repair of congenital defects. Upon hearing this recommendation, Michael and Leann immediately moved from San Diego to the Santa Rosa area where Leann’s family lived to be in closer proximity to UCSF’s specialized medical services.

Shortly after their move, Michael began to seek out veterans’ resources to help his family and himself. Michael was eventually referred to Swords to Plowshares by a veterans’ outreach worker at the Wounded Warrior Project. By the time Michael was put in touch with Swords to Plowshares, he was, as he called it, “emotionally, mentally, physically, and financially bankrupt.”

Once he met our team at Swords to Plowshares, he began working with our staff to enroll in local VA healthcare, receive employment services, and find permanent housing. Over the last few months, Michael has started to regain stability in his life and Leann received specialized prenatal care at UCSF for their daughter. On March 8, 2018, the couple celebrated the birth of Faye, whose heart condition was fortunately not as severe as doctors originally imagined. Faye has seen significant improvement since her birth, but is still being monitored and under the care of USCF’s pediatric cardiac specialists.

Michael said, “We may have been through the ringer, but me and my family are doing well. With the encouragement of [Swords to Plowshares] staff members like Grant Hower and Basheer Robinson, I am continuing to be proactive in just about everything I need to so I can support my family.”