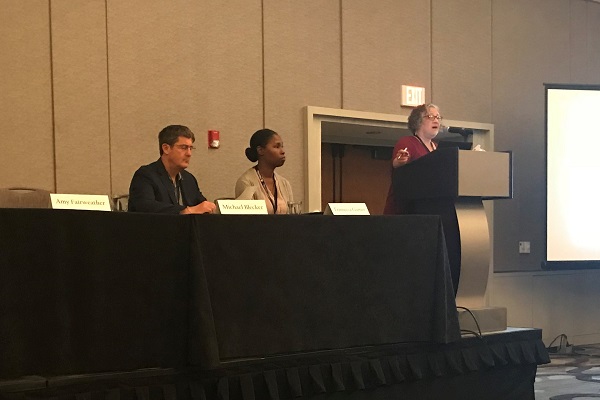 Last week’s National Coalition for Homeless Veterans (NCHV) 2018 Conference was built around the theme “Progress. Practice. Perseverance.” And Swords to Plowshares came to work. Seven staff flew to Washington, D.C. to deliver presentations on aging veterans and our signature Combat to Community® training for social service providers, to network with amazing leaders from all parts of the country, and to meet with lawmakers to discuss our mission to end veteran homelessness.

But there was worry in all the faces in the room.  For the first time since the national effort to end homelessness was announced, we were forced to confront that last year there was a rise in veteran homelessness. “It’s easy to feel discouraged when you see that number tick up,” Kathryn Monet, chief executive officer for NCHV stated. “It’s a setback for the movement. But we don’t want to lose sight of what we have accomplished across the country. We don’t want to look at this number and say that we’ll never get there.”

Secretary of Housing and Urban Development, Ben Carson, opened the conference, and claimed if you remove Los Angeles County from the equation, then veteran homelessness decreased last year. Los Angeles County has the highest number of homeless veterans than anywhere else in the country; to remove them from the equation disregards roughly 5,000 veterans. A dismissal of hard-to-serve areas and populations sparked a flicker of unease felt throughout the conference.

Overall, conversations among providers were very localized to our own communities. And that makes sense: that’s where our efforts are focused as we get to a functional zero. Initiatives like the Mayors Challenge bring local governments and community providers together in a common mission. Since June of 2014, more than 880 mayors, city and county officials, and governors have joined the Mayors Challenge. 63 communities across 33 different states have achieved the goal. While we must start in our own communities, local efforts like these can also decentralize the national effort and the overall message. It brings responsibility to individual communities, rather than the community at large. It’s what brought many to say during the conference, “Los Angeles aside, we’re doing a great job.” But Los Angeles and other cities, including San Francisco, which grapple with wealth inequality, struggle to house veterans in our communities amid a lack of affordable and accessible housing. California has experienced a 17 percent rise in homeless veterans since 2016. It makes us forget that if we don’t eliminate veteran homelessness in every community, we won’t end homelessness.

WHAT DOES IT TAKE TO END VETERAN HOMELESSNESS?

As Bev Ebersold from USICH stated, “Getting to functional zero doesn’t mean taking our foot off the gas. We must continually assess and improve our efforts. That means reaching every hard-to-serve area, and every underrepresented population.”