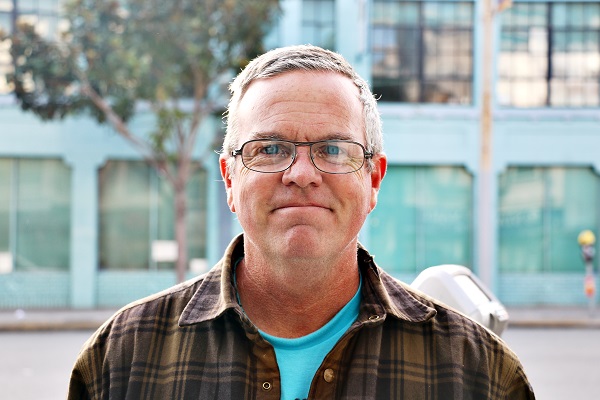 Mark Jeffrey, a San Diego native, served in the U.S. Air Force (1993-1995), as a medical supply specialist. Since leaving the military, Mark hasn’t had the easiest life, and just over two years ago ended up homeless. During this experience, Mark has tried to use the shelter system as much as possible to stay off the streets, but with the waitlist and need being so great in San Francisco, there have been many times he has had to resort to sleeping outside.

Since Mark only served two years in the military, he doesn’t qualify for most veteran benefits and receives only general assistance as a result. Due to his current homelessness and limited income, finding a warm, healthy meal has been a daily challenge for Mark and his health has suffered.

While bouncing around the San Francisco’s shelter system, he was eventually referred to Swords to Plowshares, which serves all veterans, no matter their length of military service or what era they may have served in.

Mark walked into Swords to Plowshares’ San Francisco Service Center for help with his lack of housing and found out about the support groups offered. While seeking help, Mark discovered that Swords to Plowshares has a food program for veterans currently facing homelessness and now had a healthier option for his meals.

The food program at the Service Center is new to Swords to Plowshares, having only been around since early 2018. This program was created as a response to the need of providing nutritious meals to veterans facing homelessness. Thanks to donations from Copia™ and other community partners, this program has continued to expand since its inception.

“My doctors told me I needed to stop eating processed foods to improve my health, and that had been a significant challenge for me,” Mark said. “But now, the challenge of finding a healthy, tasty meal is a bit less daunting, since Swords to Plowshares provides great options with their food program at their service center.”

Donate to support veterans and sign up to receive our mailer twice a year!