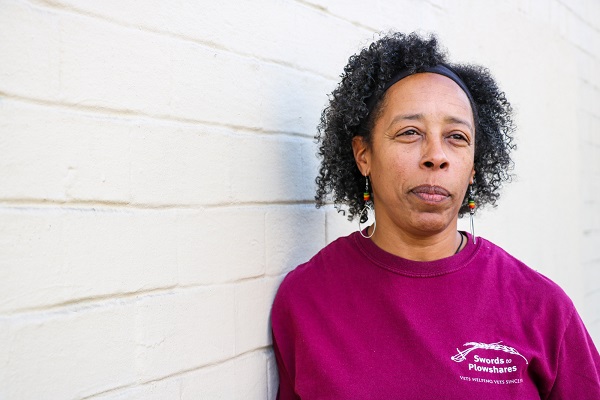 Evonne Williams grew up in South Central, California as an only child, raised by her proverbial village which included great grandparents, grandparents, mother, her mother’s siblings and cousins. Some of her fondest memories of her youth were working on cars and other mechanical projects with her uncles and cousins. While in high school, Evonne began to think about a career in the military and ended up taking the Armed Services Vocational Aptitude (ASVAB) test and scored high on the exam. This led Air Force recruiters to call Evonne and convince her to enlist.

With a natural mechanical inclination, Evonne enlisted and served (1985-1988) as a crew chief mechanic working on F-4 Phantoms fighter jets. During her time in the military, Evonne discovered she was queer. As a queer black woman serving before “Don’t Ask, Don’t Tell,” her experience had its challenges. Evonne loved her job as a mechanic and the peers she served with, however, she felt she couldn’t be her true self and decided a career in the Air Force was not for her. Upon leaving, Evonne discovered that just being a veteran didn’t guarantee you a smooth transition to the civilian world: she went to school and dove into art, first making that her career before transitioning into the social services field.

Working with underserved and disadvantaged populations became Evonne’s passion, and she became deeply involved with working with youth and adults in the areas of domestic violence, homelessness, substance abuse, and mental health issues. Evonne worked at various nonprofits in the East Bay before landing a job as a case manager, working with veterans at Operation Dignity in Oakland. As a case manager and a veteran herself she understood the unique challenges women veterans face in trying to access resources in their communities.

To ensure women veterans felt welcomed and supported, Evonne worked to broaden her professional network and became involved with Swords to Plowshares’ Women Veterans Professional Network (WVPN). WPVN was a professional development initiative, which consisted of workshops and networks events specifically for women veterans. Evonne attended numerous workshops held by WVPN and enjoyed the experience so much that she began following all of Swords to Plowshares’ job openings on LinkedIn.

Finally, a case manager position in Swords to Plowshares Employment and Training department popped up and she immediately put in an application. With her skills and qualifications, Evonne was a perfect match for this position and was hired shortly after her interview.  In this position, Evonne helped get veterans job ready by improving their resumes, assisting with job searching, preparing for interviews, and providing necessary resources like tools and transportation for job training.  After about 18 months, Evonne took a position as a housing specialist with our Supportive Services for Veteran Families (SSVF) program and has since been promoted to a program manager position within the SSVF program.

Evonne is a devoted advocate and another fantastic example of our “vets helping vets” model. Evonne stated that the best part of her job is working with women veterans. “I love working with our women veterans since I know from experience how hard it can be to look for resources and access services. It is really rewarding to give back and create a safe space for these women and help get them the support they need.”

Give to Support Our Mission