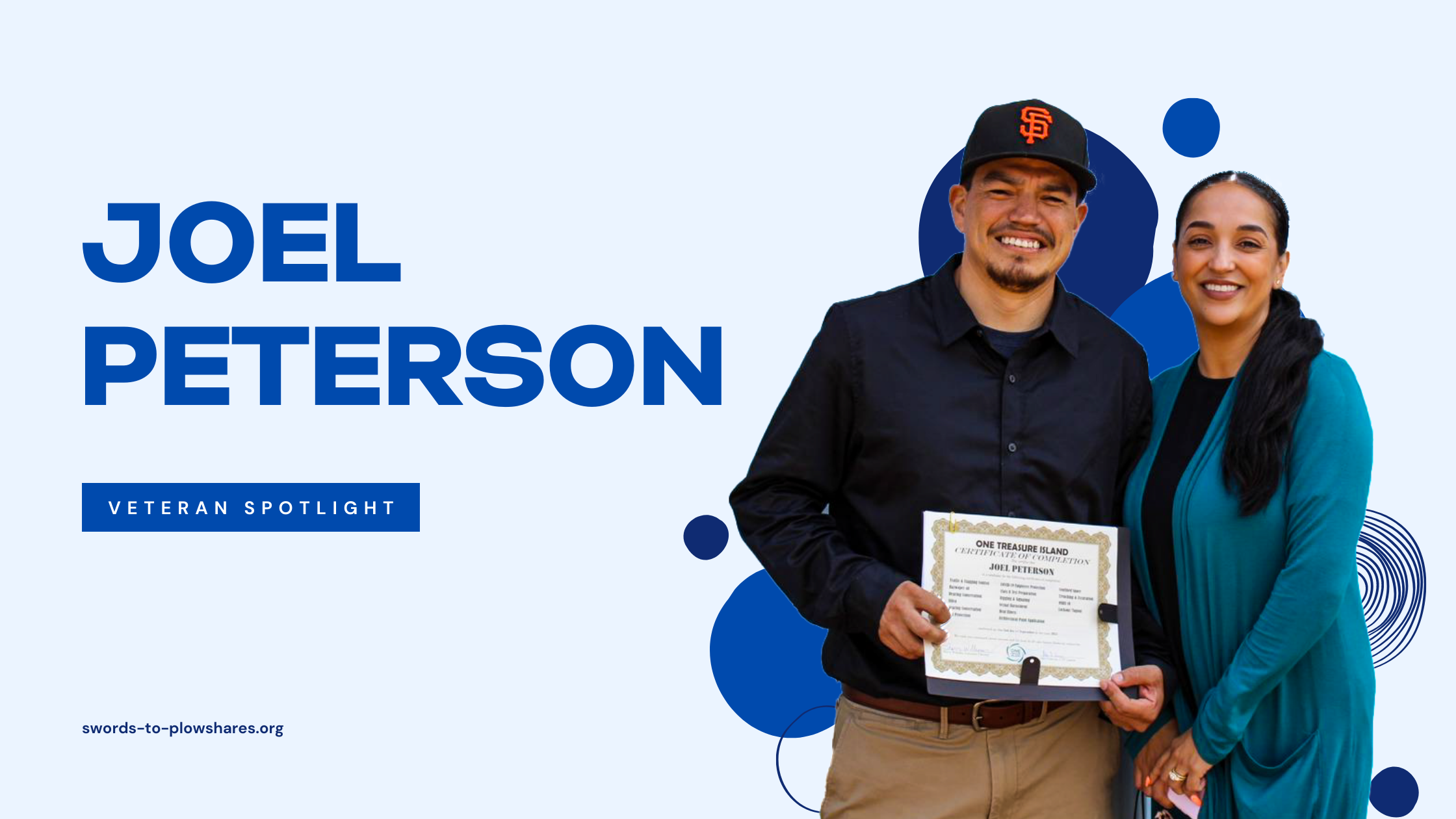 Joel Peterson, 41, grew up with his parents and two siblings in Salinas, CA. Joel dropped out of high school and enrolled in adult education to complete his G.E.D in 1999 and enlisted in the U.S. Army. Growing up watching G.I. Joe movies and playing with G.I. Joe action figures, Joel always wanted to join the military to become a soldier at a young age. Joel served in the Field Artillery but separated in 2004 at age of 24. He recalls as he looks back to having difficulties transitioning to the civilian life, “I was young, so I wasn’t experienced in life outside of the military.”

Joel, his wife, and their children recently relocated from Las Vegas to San Francisco. The big move was a step toward a new chapter after having coped with the passing of their son. Joel worked as a chef at a restaurant but became unemployed during the pandemic. He and his family lived with his mother until she became ill, and for the safety of their children, they were forced to move out and became homeless.

They sought assistance from Compass Family Services and received short-term emergency housing in a nearby hotel, but their hotel voucher was coming to an end. With a week left in their stay, Joel saw Swords to Plowshares’ outreach team walking around the hotel. After seeing a “vets helping vets” sign, he inquired about it with a Swords staff, and from that point, everything began to align.

After enrolling with a Swords to Plowshares case manager, Joel began working with two departments: housing and employment and training. His SSVF Case Manager, Ruben Kessler, was helping him find permanent housing, while he and his employment specialist, Dante McCormick, worked together to look for a new and fitting job opportunity.

He took a leap of faith toward a new career path and signed up for Swords to Plowshares’ free construction training program with One Treasure Island. He was eager to learn the new trade and find work. In September 2021, Peterson graduated from One T.I.’s 10th Construction Training Program. At the graduation, he was invited to be one of the three graduate speakers.

Today, he is comfortably living in an apartment with his family and has recently begun his new position as a Carpenter Apprentice with Hancock Richard, Inc.

Joel expresses his gratitude to Swords to Plowshares and its staff. “I am just so happy and grateful. I am blessed to have been allowed the opportunity to join this program through Swords to Plowshares. Swords has been an instrumental part of me and my family getting back on our feet.”

Over the next year, he wishes to save enough money with his wife to move into a new home and peacefully raise their family without worrying about financial hardships. He is excited about his new position and hopes it brings greater opportunities for the future.