Veteran Goes from Homeless to Finding Success in His Field 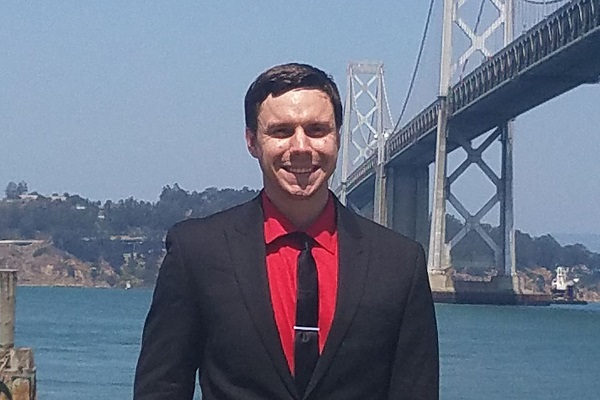 Sean Gill wanted a change. To start, he wanted to live in San Francisco and the move made sense. “I had always liked the city. A friend said I could rent a room, and I have friends here!” he explains. After serving in the infantry during the Iraq surge, Sean had invested money in a successful security company, where he worked for a few years. Then, Sean sold his company and got a steady job at another security company. This security company has branches operating in various locations in the Bay Area. So, Sean submitted his job transfer.

However, Sean hit some stumbling blocks while he waited for his job transfer. The process took longer than anticipated, and he found himself without permanent housing and without income in San Francisco, one of the most expensive cities in the world.

Jess Bank, a Job Developer at Swords to Plowshares, remembers when Sean came in to ask for help. “Sean was referred to us by one of his friends, was super excited, and really confident. He knew it was just a matter of time before he found a job.” Sean was willing to do whatever it took to find employment. He went to every appointment Jess scheduled for him and always followed up. “I wasn’t out here to fail. I just had to do everything I had to do. I was always in Swords’ office coordinating interviews and working on whatever came up next,” Sean affirms.

Sean and Jess worked together to find other job opportunities that would use his hard working skills. They didn’t want Sean to find just any job, but for Sean to step back into a career that he was passionate about and had a bright future in. Job Developer Jess was able to help with securing job leads and interviews, and assisted Sean with providing bus passes and a suit to wear to interviews. Sean’s hard work paid off and he ended up with two job offers to choose from.

“I am happy for him. He went from having his own business to being in a tough spot. I’m glad he has been able to re-establish himself and find his spot in San Francisco,” Jess says. “He has the confidence within himself that he is worthy of employment and would find employment. And he did.”

Since hired by a leading Bay Area security firm, Sean has been promoted twice. He is currently their Operations Manager, with responsibilities around staff scheduling, payroll, and hiring activities. “Success stories like this help confirm why I like working with Swords to Plowshares,” Jess Bank explains. “Anyway we can support veterans – we try to do that. When all the pieces come together and create this beautiful picture, it’s rewarding for everyone involved.”

Sam Thomasson is the Employment Program Relations Coordinator with Swords to Plowshares. She supports the Employment and Training programs with internal and external communication, social media, employer relations, outreach and events. Sam graduated with a bachelor’s degree in English and women’s studies from the University of North Carolina in Chapel Hill. She has five years of experience developing and facilitating programs and is passionate about delivering quality programs that enhance the lives of others.