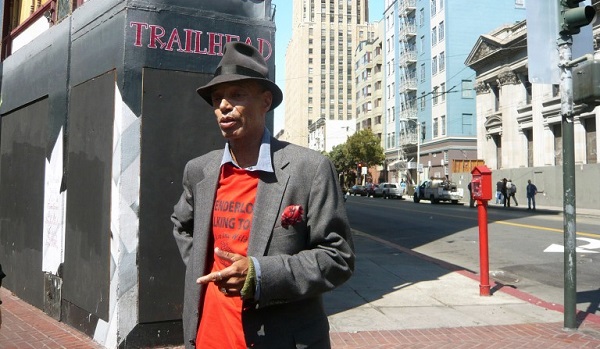 When most people envision an organized tour of San Francisco, the last neighborhood that comes to mind is the Tenderloin.

Known for gritty streets, drug dealing and poverty, its reputation is enough to send residents and tourists alike in the opposite direction.

Del Seymour, however, known around town as the Tenderloin's unofficial mayor, is doing everything he can to change that.

An Army veteran and father of four, Del himself used to sell crack cocaine on the Tenderloin's corners for nearly two decades before getting sober eight years ago. After a stint as a cab driver -- a profession that easily lends itself to tour guiding -- he decided to dispel the myths of the storied streets by taking groups on walking expeditions -- aka "Tenderloin Tours.""

The goal is for people to get a completely different understanding of the Tenderloin, and realize that there are some good things and some bad things, but like any neighborhood there are restaurants, parks, libraries, post offices, and homeless," Del says today. "In many ways this is no different from the Marina or Noe Valley."

On his tours, spots of interest include the St. Boniface Catholic Church, whose Gubbio Project allows up to 300 homeless a day to rest on its pews for "sacred sleep"; Boeddeker Park, which offers a green refuge and children's playground; the Lava Mae mobile hygiene operation that provides "showers on wheels"; and street murals whose bright colors break up the gray and grit."

The key thing is, the Tenderloin is a community. I'm trying to give people another reason NOT to avoid the Tenderloin," Del says.

One recent group to sign up for a Tenderloin Tours is Swords to Plowshares, the Bay Area veteran service organization that Del first came to as a client in need, and now serves as a member on its Board of Directors.

"The tours are specialized to paint a picture for service providers to see where some clients actually live, and how they live," Del says. "Otherwise you have no idea what the guy is trying to physically describe when he's sitting in your office."

Also on the tour is a stop by Del's other pet project: Code Tenderloin, a youth program he founded for local residents to work on their job-searching and interview skills in order to land entry-level positions within the tech industry and local businesses -- or in Del's words, "social makeovers for workforce development."

"It really empowers people, and the process gives a person the hope that they can contribute to and benefit from the tech economy as much as anybody else," said Swords to Plowshares policy associate Tim Jakab.

Though some community advocates have blamed the tech industry for raising rents and changing the nature of the city, Del sees it otherwise."

(Tech companies) provide a social, cultural, and economic integration in the Tenderloin which we badly need, by way of using our businesses, volunteering, and just walking through the neighborhood," Del says. "Some people are surprised to see social agencies come together to manage homelessness, but this is bridging the gap between the digital community and non-digital community.

"Apparently the tech community agrees. Over the last six years, companies that have sent its employees on Tenderloin tours include Dolby, Twitter, AirBnB, Zoosk, Zendesk, Spotify, and LinkedIn."