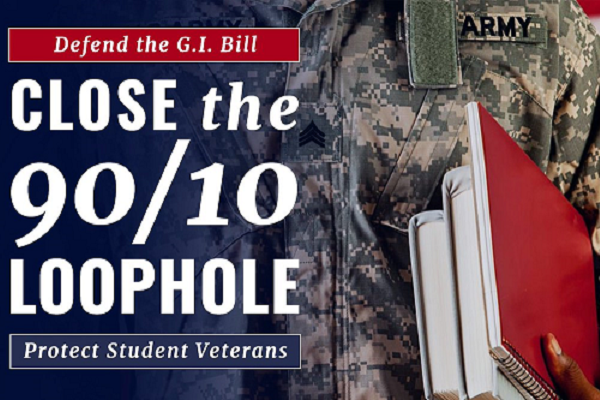 In an effort to protect taxpayers and college students, Congress instituted the 90/10 Rule in the Higher Education Act, saying that proprietary (for-profit) schools must derive 10 percent of their school revenue from non-Title IV funds (funds other than federal student loans and grants). The 90/10 Rule resulted from bipartisan concerns to stem fraudulent and abusive practices of for-profit institutions. The rule has curbed these practices, but has also created a loophole whereby for-profit schools can continue abusive practices targeting student veterans.

To safeguard our veterans, Swords to Plowshares supports the Military and Veterans Education Protection Act. This legislation was developed as a response to the increasingly predatory nature of for-profit institutions and is meant to protect current service members and veterans from schools who only see them as a source of revenue. The legislation includes the GI Bill and other VA educational funds under the 90/10 Rule and by doing so forces these institutions to rely on other sources of non-VA funding. Institutions in violation of the 90/10 Rule for two years are not eligible to receive Title IV funds for the following two years, stripping for-profits of most of their funds and creating an effective deterrent from engaging in predatory practices.

We urge you to contact your representatives and tell them to protect student veterans by supporting the Military and Veterans Education Protection Act.