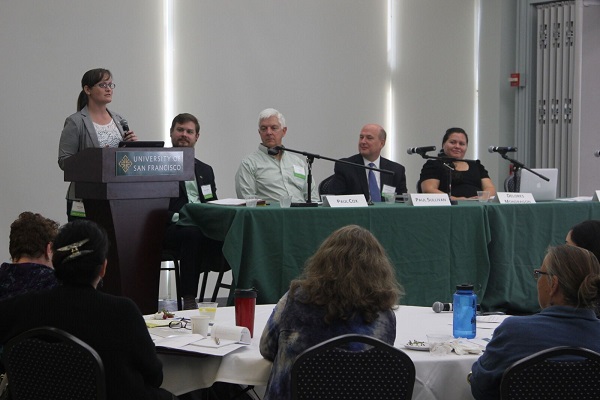 More than 200 veterans, educators, students, behavioral health providers and faith-based caregivers attended our Moral Injury and Veterans Symposium earlier this month; by way of presentations, panels and facilitated discussions, attendees shared both perspectives and personal narratives, and helped others to become culturally and trauma-informed advocates for veterans.

For those who weren’t able to attend, we’re presenting a summary of three takeaways from the sessions. We hope to continue the conversation and promote understanding of this profound wound.

1) What is moral injury?

A relatively new phrase but not a new concept, moral injury is the grief, shame, and guilt that results from violating your personal code, going against a fundamental sense of right and wrong. Combat and theatre veterans in particular struggle with the moral and ethical ambiguities of war, especially with regard to the pride of their military service combined with the shame and dishonor of what they’ve seen while serving. It can also manifest as a result of such well-documented themes as survivor’s guilt and institutional betrayal.

Moral injury overlaps with trauma, which is why counselors see overlap with moral injury and PTSD—and why we as a nation need to consider the impact of moral injury before we go to war. Note there is no current diagnosis of moral injury in the DSM-5 (Diagnostic and Statistical Manual of Mental Disorders), and the VA was not fully funded for mental health counseling before the U.S. invasions of Iraq and Afghanistan.

2) In their own words: Survivors of moral injury

“The last 10 weeks of my tour, I was ‘in the rear with the gear and beer.’ Suddenly the lead squad opened up on the first villagers they saw and killed them instantly. The epiphany came when I realized I was walking in to a village to murder people. It changed the way I looked at my life, the military, society, the world, even my parents. I decided the (Vietnam) war was wrong. I didn’t condone it, but I didn’t stop it.”

“Throughout my deployment, I saw myself in the Iraqi people and began to resent myself for simultaneously being ‘the invader’ and the ‘defender’—in their personal space defending my own.”

“Two fellow Marines died on my watch. I buried those feelings. I just recently started talking about it again. Every time I tell the story, I lose a piece of myself and I still feel that guilt. Someone thirty years older than me still has issues with this. Does it ever really go away?”

“Even in a position of power, having to figure out how to implement a new directive from Congress that I considered to be out-of-touch with what was happening on the ground, I felt the moral injury to have to make management decisions that I did not necessarily agree with. It’s a similar struggle when preparing the next group for deployment—you want to be supportive, but you also know what they are going to be up against, and it’s hard to send to them into that.”

3) Moral injury can get better

Moral injury is not something that one naturally “gets over” or “grows out of.” Throughout life, triggers can bring back moral injury as if it were yesterday. That doesn’t mean, however, that veterans should not seek help or that counselors cannot apply best practices. The goal should not be to get rid of grief, but rather to cope with it. When moral injury comes to the surface, acknowledge what it is and see it for what it is. Staying connected to support systems and relationships is crucial: romantic, family, children, and those you served with. Don’t shy away from talking about it.

For those seeking to help veterans afflicted with moral injury, working with trauma survivors is walking a delicate line. One of the most effective methods is to simply be present, build a rapport and to listen authentically. And listen with a “third ear”—most often the things that people don’t tell you are at the root of their trauma. Treatment takes time, building up each session until veterans are able to recount their traumatic experience all the way through at their own pace.

Final thought: Activism and advocacy serve as unofficial treatments for moral injury, which is why veterans have been at the forefront of social movements throughout history. One veteran who spoke at the Symposium credits joining the anti-war movement with saving his life; another found healing by returning to Vietnam to help build schools and establish hospitals.

In other words, none of us are done serving.

To see the PowerPoint slides from the Symposium please visit our SlideShare account.

Special thanks to Swords to Plowshares’ Institute for Veteran Policy, the University of San Francisco’s Peace & Justice Studies Program, and the Leo T. McCarthy Center for Public Service & the Common Good.