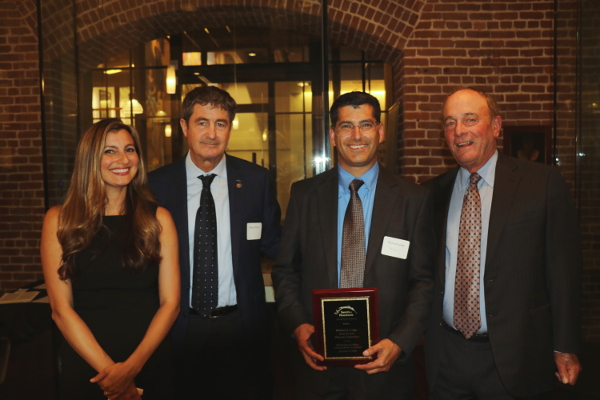 Mike Lodge, senior counsel at Chevron, was named the Bill Brockett Pro Bono Attorney of the Year by Swords to Plowshares on September 20, 2018 for his outstanding work with veterans. The annual award is presented to a volunteer attorney for his or her outstanding service to veterans and dedication to Swords to Plowshares’ Veterans Pro Bono Program. The award is named in memory of William “Bill” Brockett Jr., who co-founded Keker, Van Nest & Peters LLP along with John Keker.

Mike Lodge served in the U.S. Coast Guard (1984-2012) as a deck watch officer before going to law school in the Coast Guard and later serving as a prosecutor and military judge on the Coast Guard Court of Criminal Appeals. After retiring from the Coast Guard, Mike landed a job with Chevron as a regulatory affairs and advocacy coordinator before moving up to senior counsel.

Not too long after Mike started at Chevron, the company launched their pro bono program and selected Swords to Plowshares as one of their premier partners. A colleague of Mike’s was on Chevron’s pro bono advisory board and recruited him to participate.

With Mike’s experience as a former prosecutor and military judge, he was a natural fit to help provide legal assistance to veterans trying to obtain VA benefits. Mike already had an extensive record of pro bono service, having previously worked with domestic violence survivors. However, volunteering with Swords to Plowshares was his first experience working with veterans outside of his time serving in the Coast Guard.

As a former base executive officer (XO), Mike had been involved in numerous administrative discharge proceedings for military service members and identified two problematic issues with this process. One is that due to the expedient nature of the administrative discharge process, service members can be separated from the military for relatively minor mistakes or errors in judgment. The other issue is that later in life, these individuals have recognized how their less than honorable discharge status affects their career aspirations and personal life and want to rectify the mistakes of their youth through the military discharge upgrade process.

Mike’s first pro bono case was with a young decorated Marine who suffered from PTSD and had been self-medicating with drugs and alcohol during and after his time in the military. Thanks to the help of a Chevron colleague who partnered with Mike on the case, they obtained a 100 percent service-connected disability rating through the Department of Veterans Affairs (VA), resulting in a significant amount of payback for this veteran. He was extremely grateful for this assistance, and as a result, he is now in a stable living environment and gainfully employed.

As a direct result of this pro bono win, Mike started to encourage other colleagues to participate and partnered with a second colleague to take on an additional case for Swords to Plowshares. Currently, they are working with a Vietnam-era veteran to help him navigate the complex VA disability claims process.

Besides directly representing veterans with their VA claims, Mike has also staffed numerous legal clinics in Oakland and Menlo Park. These free legal clinics are often the first time veterans are able to meet with attorneys trained in VA law and receive expert advice on pursuing their VA claim. They also learn about the other programs and supportive services Swords to Plowshares may be able to offer in addition to legal assistance.

“We’re thrilled to honor Mike with our Bill Brockett Pro Bono Attorney of the Year award for 2018,” said Swords to Plowshares’ Legal Director Kate Richardson. “Mike has been a dedicated and enthusiastic volunteer since he started with the program several years ago. In addition to staffing multiple legal clinics with Swords to Plowshares, Mike has taken on four individual cases and has secured a significant win for one of his veteran clients. Mike also serves as an active member of our Pro Bono Advisory Board. We are deeply appreciative of Mike’s ongoing commitment to the legal needs of our community’s homeless and low-income veterans.”