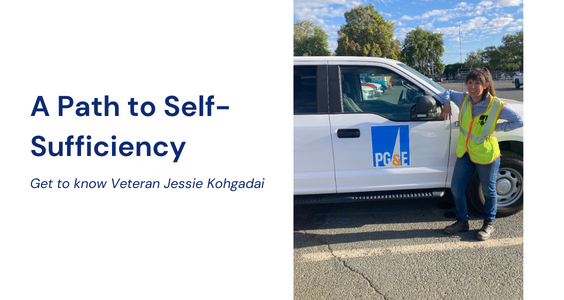 Jessie Kohgadai, was raised in Winters, a small California town in Yolo County. “It was a really wholesome childhood,” she says while reminiscing summer nights sleeping under the stars, playing by the creek, and being surrounded by farmland. She left her hometown after graduating high school and much of her family did as well. In 2011, she found herself settling down in the Bay Area.

Jessie was ready for a fresh start and was having difficulty finding where that start was.  She aimed to find an opportunity to get ahead, with the ambitions of obtaining a college degree. In 2011, Jessie made the decision to enlist into the U.S. Navy Reserve. By September, she was off to bootcamp. She became a hull maintenance technician and learned how to weld. Through her military service, Jessie attended university and graduated from Mills College with a bachelor's degree in Business Economics.

At the time when the pandemic began and shelter-in-place was enforced, Jessie and her husband were newlyweds experiencing a lot of personal shifts. They had to make more adjustments when she was given mobilization orders in July of 2020. She reported to Washington state and served as a hull maintenance technician for 10 months. After her orders were completed in May 2021, Jessie came back to the Bay Area and was left to merge back into a civilian lifestyle.

Jessie had a goal of finding a skills trade position. Her role in the Navy ignited a passion for creating and building through welding. She worked side jobs to make ends meet while applying for positions at local unions. She needed steady employment and her efforts were not moving as quickly as she hoped. Then one day, her VSO gave her a flyer for Swords to Plowshares and she decided to reach out for employment and training services. Jessie shared her needs during her initial meeting and was referred to our partnership training with PG&E’s PowerPathway. “I didn’t know if it was going to work. I felt like I was putting all my eggs in one basket,” she says. Jessie was worried about what the outcome could be. After extensive screening, Jessie was selected to be a part of the fourth Swords to Plowshares and PowerPathway cohort.

Jessie entered the 10-week “Entry to Gas Pipeline Inspector” program and got to do much of her training at a facility in Winters, a pure coincidence that brought her career journey full circle. She successfully completed the program in June 2022, the only woman in her graduating class of fifteen veterans. Jessie shares, “In the military, women are underrepresented. Not only do I want more veterans doing this kind of work, but I want more women to be inspired.” Jessie now works as a Pre-Utility Inspector in East Contra Costa County. From persevering through hardships, Jessie is regaining financial stability with guaranteed career growth within the utility industry. Jessie and her husband are hoping to purchase their first home, which felt like a far-out goal less than a year ago.