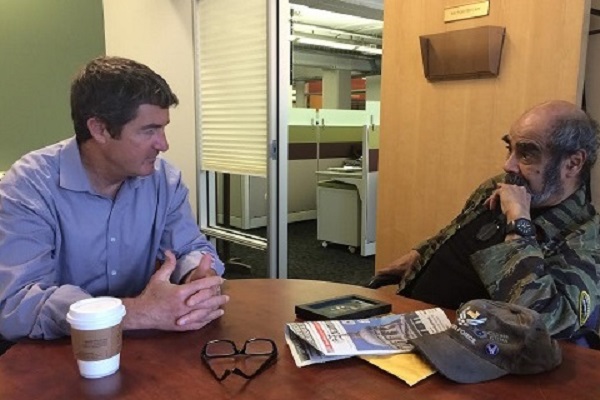 Joe Luna can still remember the first year that Swords to Plowshares opened its doors, when the fledgling veteran service organization consisted of a tiny storefront rounded out by folding chairs in San Francisco’s gritty Tenderloin district.

“It was primitive and Spartan then, but I could talk to them and I felt really comfortable, because they had been grunts like me,” Joe says today. “Those guys understood because they had all been there, had been through what I went through.”

When Joe first set foot inside the bare-bones office, however, he wasn’t looking for help with finding a housing unit or upgrading his discharge status. Instead, he simply wanted to talk to someone who could relate.

“I couldn’t talk to people who hadn’t been in the military, or else had seen some John Wayne or propaganda war movie, where you never see a young Marine die in someone’s arms crying ‘Momma, help me.’ I couldn’t even speak to my mother and father about it.”

An Air Force veteran who served as a combat medic from 1961 to 1966, Joe dropped out of the University of San Francisco and decided to enlist before he could be drafted. Soon afterward he shipped off to Vietnam just as the conflict there was beginning to escalate, and he spent his 21st birthday deep in a foxhole.

Once while collecting dog tags from dead soldiers, Joe was shot by a teenage girl—whom he recognized from a village that his outfit had recently aided. Luckily he was wearing a flak jacket and got off with only a few broken ribs.

“We were not prepared for what was happening over there. Little kids come around asking for candy, suddenly they pull a string and a bomb goes off in a café. When you see dead bodies or people dying in front of you, that messes up your head.”

What struck Joe most about Vietnam, however, was the ready availability of heroin and opium, sold right inside of bathroom stalls. The abundance of drugs ensured they found their way to a majority of service members, from Iowa- and Idaho-born farm boys to military rabbis and priests.

Nor did Joe emerge unscathed, quickly falling into unemployment and substance abuse on his return home. A third-generation San Franciscan from a blue-collar neighborhood in the Mission District, Joe was shocked at the reaction he received from mainstream Americans upon learning he was a Vietnam vet.

“I was hit and spit on, and told I was stupid for going over there. Hippie chicks asked me if I was a baby killer or how many I killed. I’d say, ‘I was a medic, why don’t you ask me how many people I’ve saved?’”

His frustration led Joe to Washington, DC, in 1971 to participate in Operation Dewey Canyon III, where the former Staff Sergeant along with fellow veterans, famously tossed their awards and medals on the steps of the Capitol in protest of both the war and the nation’s shabby treatment of its vets.

Back home, visiting the San Francisco VA office only compounded Joe’s frustration, where their primary solution to Delayed Action Syndrome—known today at Post-Traumatic Stress Disorder, or PTSD—was to prescribe opiates.

“The VA was really dropping the ball. It was just like, ‘Here, take some pills,’” Joe says. “All of a sudden I would hear the sound of police or a news helicopter, and I would hit the ground. Local gangs had gotten hold of AKs somehow, and the sound of an AK-47 or an M-16 is something you never forget.”

Joe’s fortunes began to change, however, when a neighborhood buddy told him about a new grassroots organization called Swords to Plowshares. At first Joe was reluctant after his dealings with the VA, but he was assured this time “there would be no BS.” Soon Joe became a fixture at the regularly scheduled “rap groups,” sharing stories, laughs and tears with fellow veterans.

“Just talking was the most important thing, and Swords made me feel at home. There was no condemning, you didn’t have to be guarded. One thing they taught me was anger management, to never lower myself down to anyone else’s level. I served my country and I have nothing to be ashamed of. I owe my story to Swords to Plowshares. These guys are right on.”

Soon Joe was able to leverage his military experience to a job at San Francisco Kaiser Medical Center as a lab tech, where he worked for 42 years until retiring in 2010. There he also met his wife—a self-described “hippie chick.” Today their son is working on a PhD in psychology at New York University.

At 73, Luna volunteers daily at St. Anthony’s, helping serving food to seniors. Recently Minority Leader Nancy Pelosi stopped by and requested a photo together during a staff visit.

“She said, ‘Sergeant, is it okay if I have my picture taken with you? I know the grunts do the hard work to make the officers look good.’ She was funny and down to earth, and hearing her say that, I felt very elated.”

Most recently Joe stopped by our current office on Howard Street south of Market, where he worked with our drop-in services to track down his long-lost DD214, and took a moment to catch up with Executive Director Michael Blecker.

“Joe was able to get real emotional support—the kind that comes from fellow soldiers so he didn’t feel like he was out there on his own,” Blecker said. “Certainly talking to former service members who could relate to what he went through was a big part of his healing. Often it’s not just getting an opportunity but making sure you don’t blow that opportunity by drinking or getting in beefs. Who knows how many beefs Joe avoided by having people to talk to?”

For the last 16 years, Joe has marched with Swords to Plowshares during the annual Veterans Day Parade. He keeps a military-issued can opener on his keychain and still wears his fatigues around town. Every so often, his friends will spot him, inevitably followed by a friendly shout: “Hey, Sarge!”

Brian Jarvis was the Communications Manager for Swords to Plowshares from 2014 to 2016. He is currently a San Francisco-based writer and serves in the California Air National Guard.