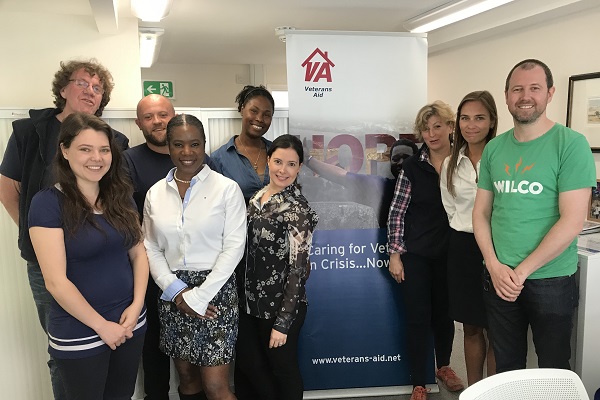 Now that my time with Veterans Aid (VA) has ended, I am left thinking back on those two weeks, what I learned, and what the biggest takeaway from my time in London was.  Not only did I learn about veteran homelessness in the U.K., but I also learned how one agency can have an impact on veteran care far beyond their doors.  While VA is physically located in London, if you take a closer look at their website, you can see that they have a global impact.  How does one agency have such an effect with less than 30 staff members?  They have an uncompromising, data-driven approach to their work and a CEO who questions the status quo to stay true to their mission: to address the causes of homelessness, but most importantly to end veteran homelessness through prevention.

One of the things that struck me when talking with the staff at VA is that they are all very clear about their definition for success: when you can’t tell the difference between a veteran who was once struggling and any other person walking down the streets of London.  Simple as that seems, it spoke volumes.  There was no public cry for veterans to have any “special” treatment within the confines of VA due to their military experience.  VA views each veteran’s military time as an asset and calls on those skills to reinforce how to reintegrate into civilian life.  This is not to say that they don’t have veterans needing support with mental health, substance use, or medical challenges; it just means that this experience is normalized, and accessing care is what anyone would do with these issues.  VA makes it clear that the problems facing veterans are the same as those facing most folks who find themselves homeless or on the brink thereof: an inability to find work that pays a living wage, struggling with the increased costs of housing, lack of access to quality education, and so on.  Dr. Milroy cited an article during his talk at Kings College (the “Myth of Stressed-Out Soldiers On The Street” by Heidi Kingstone), which addresses how agencies and systems can perpetuate the wounded veteran stereotype and its negative impact on service members, both former and presently serving.  However, while being a veteran gets you access to a quicker response system of care in London, at the end of the day, veterans are made to feel “normal” and not “special”.

VA has a model we in the U.S. can look to as a way of doing business that works. It’s not based on business as usual, where each veteran goes through a lengthy intake process before an agency has ever asked what he or she needs and wants to work towards. The welfare to wellbeing model is built upon addressing the needs that veterans bring to the table, as well as those needs that staff notice are keeping folks stuck in their situations.  This model is put on display with residents in VA’s transitional program.  Veterans meet with staff formally on a monthly basis to update their support plans, which can focus on reaching their employment goals, addressing whatever baggage is impeding their ability to maintain housing, reconnecting with family, etc. Importantly, it is always based on each veteran’s stated goals at that time.  Veterans are given the power to create their plan and take ownership for next steps, as these goals are theirs and not those imposed by staff.  Simple but major interventions are carefully crafted to further reinforce self-sufficiency and resilience, as these are the skills that will have an impact long after a veteran’s program stay.  While these updates are formally documented monthly, there is an open-door policy at VA and residents are constantly in and out of the main office talking with staff, following up on business, and greeting other residents as they pass by the office.  Most of the staff are in one shared office space, so there is no wrong door and residents always have access to staff that know what’s going on with their case or can quickly get up to date by simply checking their file.

The staff onsite have a strong connection with residents and there is a true partnership and a shared sense of success when veterans make positive gains during their stay.  As I sat in the office at the transitional site, it was exciting to see that the connections made were not just between residents and staff, but also among residents themselves.  There is true camaraderie built up by residents that is also part of the design process.  Residents learn how to create community among each other, which is grounded in their shared experiences of having served in the military and strengthened as they all learn and grow together while putting their lives back on track and support each other along the way.  When I visited, there was no shortage of kind words among residents, as well as direct feedback when residents were not giving all they could to themselves or the community.

The final beauty of the program is when veterans move into their new flat.  VA ensures veterans have not only a key to a new place, but also everything it takes to create a home.  The staff and some of the residents help paint, move in, and set up new furniture purchased by the agency, but selected by each resident. Whatever else is needed to ensure veterans are ready to begin their new journey is also provided.  Veterans leave the program truly ready to succeed and it shows in their low recidivism rates and high number of successful placements into permanent housing. While there are many differences in terms of the social welfare systems in the U.S. vs. London, there isn’t much difference in the needs and challenges facing the people we are both serving.  So, how will I share more details of what I’ve learned and next steps?  You will have to check out my full report, but in the meantime, feel free to read reports from prior cohorts to get an idea of what you can expect!