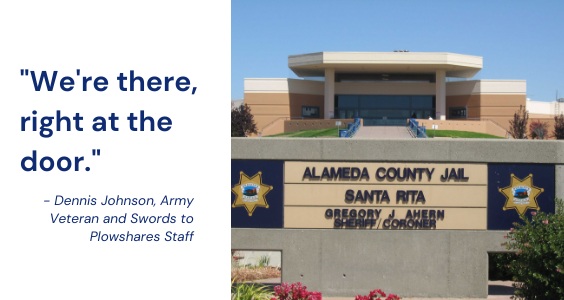 Swords to Plowshares outreach team member Dennis Johnson has made it his mission to meet veterans at the gate the minute they are released from Santa Rita Jail to help them on their next step. “I’ll be out there at 10:30pm, waiting, because I know it makes a huge difference,” Johnson says. Incarcerated veterans who are homeless do not have a lot of options available to them for advocacy. At release, those without support return to the habits that they are most familiar with despite the future harm they may cause. This year, our team in Alameda County has been making strides within the County jail system to make our services accessible to incarcerated veterans.

Johnson recalls the work it took to build a relationship with the jails in Alameda County. It was a project eight years in the making “to establish a presence” within the system. Until Swords staff connected with Corrections administrators and officers, veteran status was never discussed with inmates. Now, along with other descriptive information taken when intaking an individual, County officials ask about past military service.

Identifying veterans is a huge part of the work our outreach team does. Having partners inside the jails to collaborate with is essential to establish our presence in helping incarcerated veterans. We also collaborate with the VA as well as the Sheriff’s Office of Alameda County to connect with veterans in need of transitional housing after release. Just this month alone, we worked with Operation Dignity and the City of Oakland to house three formerly incarcerated veterans who otherwise would have returned to the street.

In addition to housing support, we also provide case management, assistance applying for change of discharge status, and other applicable resources. Speaking from his own personal experiences, Johnson states that while incarcerated, these veterans “have the best intentions and motivation to change... but [once released] it’s hard alone. I’m giving back to where I was years ago. If I had support like this [while detained], I would have been way better off.” Johnson says that providing awareness and education on available resources to both veterans in jail and Correctional staff is critical to creating change and preventing re-arrest.