Desire to Serve Vets is Both Professional and Personal 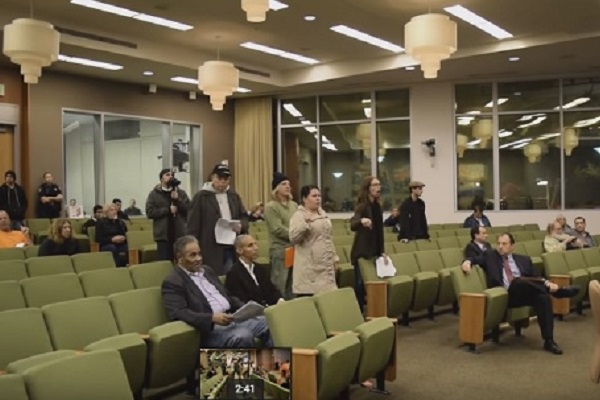 When the mayor of Sacramento stood up and walked out on her during the public comments segment of a city council meeting in late 2014, Claire White didn’t take no for an answer.

Instead she stood her ground at the podium and demanded better treatment of the city’s homeless veterans—25 of which had accompanied her and waited three hours for the chance to address the council. When Claire refused to give up the podium, the police handcuffed and arrested her along with two other homeless activists—a spectacle that was captured on cell phone video and has since received more than 1,500 hits on YouTube.

“And it was the night before a law school final,” Claire recalls. “But we continued to keep coming back to the city council every meeting for the next year. It’s illegal (in Sacramento) to share food or sleep outside, and they ticket homeless people for sleeping outside even when shelters are full. These are among the worst laws in the country, and I was speaking as a veteran in solidarity with brothers and sisters.”

It was this same passion that led Claire, a married mother of three, to join Swords to Plowshares after graduating from the UC Davis School of Law in June 2015. Bradford Adams, a staff attorney at Swords as well as her mentor through the National Lawyers Guild with whom she had founded a veteran legal clinic, informed her of an Equal Justice Works AmeriCorps Legal Fellowship and encouraged her to apply.

“I didn’t look anywhere else, I didn’t apply anywhere else. As a veteran, I feel the calling to serve my community, and Swords is the mecca of veteran services from a social justice perspective,” Claire says. “Here, we’re trying guerrilla-style to make a difference.”

“PTSD and MST (Military Sexual Trauma) hit the scene in a big way. I saw it on the front end when I was in service, and then I saw it on the back end on the street after I got out,” Claire says. “I read the statistic that one of three women are sexually assaulted in service, then looked around at the women I served with and at least three had been assaulted. I saw a lot of them getting bad discharges for drinking or getting in trouble, or suffering from mental health problems.”

Claire herself struggled to re-integrate to civilian life after her service ended, seeking out veteran circles in which she learned that many of her fellow veterans were struggling with depression and substance issues.

“If we were doing badly, what was it like for guys on the street?” Claire asks. “We’re taught not to leave anyone behind.”

Naturally attuned to the needs of women veterans, which she considers one of her focus areas, Claire is planning not only to host a women’s legal clinic in early March but to create a legal resource guide to accompany it.

The greatest challenge in Claire’s work comes from the fact that every client who walks in the door is potentially a person in crisis. Often she finds herself compelled to go above and beyond her job description.

“You have to be the calm force in the room, when a veteran is facing the whole world coming down,” Claire says. “For me as a woman veteran, I’ve found it challenging to maintain that line between veteran and attorney, but the lesson I’m learning that we each have our area of responsibility and we work as a team, with community providers that can fill the gaps in other spaces. I have thirty clients, not just one, and legal services are where I have to stay focused.”

Nor does Claire’s work stop upon returning home each night to Sacramento. She continues to serve veterans in her local community through referrals from nonprofits and legal groups; in the last two years, her efforts have ensured that over 80 veterans have received food stamps and public benefits.

“From my point of view, this is the greatest crises facing us as a nation—the neglect of our veteran population is shameful, and something everyone should be engaging on,” Claire says. “What’s gratifying is that I actually get to do something about it. I’m fighting the good fight, and that helps me sleep at night.”

Brian Jarvis is a Public Affairs Specialist with the 129th Rescue Wing and contributor who previously served as the Communications Associate for Swords to Plowshares. Follow him at @briancjarvis.