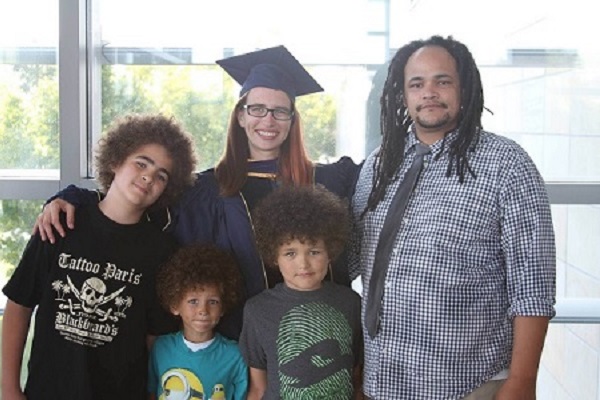 Military children face a multitude of struggles that are unique to the military lifestyle. They move an average of every one to three years, attending six to nine different schools from kindergarten through 12th grade. Their parents are gone on prolonged and frequent deployments, or they have to move to new duty stations every few years which means readjusting to new schools, neighborhoods, friends and even their physical homes. Sayings like “There’s no place like home” might have a very different connotation for a military child.

Claire White is a mother of three who served six years in the Air Force, all while going to law school full time. How did she do it? She loved the military, and all the support they provided helped her focus on school, work and family all at the same time. When she couldn’t be home, there was a program that offered nannies at a deep discount who themselves were family of service members living on base. There were also other mothers who wore the uniform and would take over when she needed to report for duty or class.

1.9 million children in the U.S. have parents that serve in the military, 2.6% of our under-18 population are living in a military family. Most children in the U.S. don’t have to adjust to their parents leaving on deployments for a year or longer. They don’t have to live with the fear that every time mom or dad leaves, there is a chance they will be coming back a very different person, if they come back at all. Parents take an oath to serve their country, but their children and family must carry the weight of this duty.

Shari Vernon was married to a Navy seaman who spent most of his 18 year Navy career being shipped out for multiple tours in Vietnam. Their daughter Shauna grew up with her father being gone for long stretches at a time. “It was quality over quantity,” Shauna said during a recent interview. Making a conscious decision to drink from the glass half-full, she admitted that her time with her father was limited, but it only made it all that more special. Was her resilience the product of an environment where she had to carry the sacrifices of the father? Or, was her father’s genetic code for duty and honor passed on to her making her grateful for the time they did have?

As a veteran of the Marine Corps, I know that life on base is much different than that beyond the formidable gate with its undaunted guards in their crisp uniforms, sharp salutes and bulky side-arms. Driving around barriers and speaking to gate guards every time I wanted to go home definitely had an effect on me, though I imagine that hindsight is where all memories make sense. What I realize now is military families with children in their cars crossed the same barriers, making their own memories of the same gate guards with their salutes and side-arms.

I come from a country where military service is an obligation. In Romania, no one thanks you for your service just like no one thanks you for paying your taxes. Everyone does it. In the years since I left the Marine Corps, I’ve been thanked for my service countless times. I decided to sign up to deploy overseas, to train in extreme conditions, and to move wherever they wanted to send me. The children of service members don’t volunteer for the deployments their parents leave on. They don’t agree to move to a new duty station every few years, to leave their house, their neighborhood, their school, their friends just as it’s starting to feel like home again. Time and time again, the children of service members endure these changes. They make new friends. They Skype with their parents from thousands of miles away. They have a parent come home missing an arm, or a leg, or the humor they used to always have. Sometimes, they don’t come back at all. This is their reality. This month we choose to focus our attention on military families as we observe the month of the Military Child.