Q & A with Ellen Leslie, Soprano Soloist for the Summer Symphony Concert 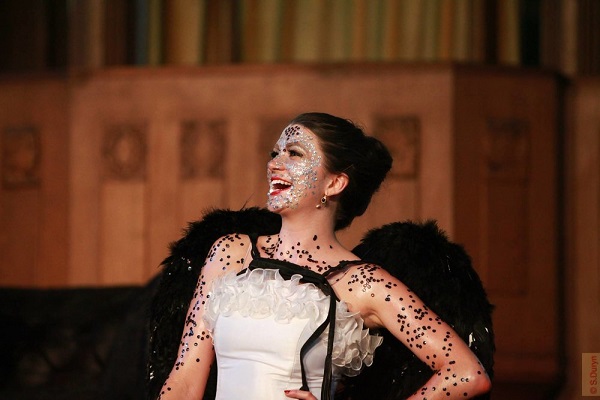 Ellen, we can’t thank you enough for joining us as our featured soloist. We couldn’t serve the nearly 3,000 low-income, homeless, and at-risk veterans in the San Francisco Bay Area without the support of stakeholders in the community like yourself. We know having you as a soloist will help us a great deal in achieving our fundraising and community engagement goals through our 3rd Annual Summer Solstice Symphony Concert.

To start, tell us a bit more about yourself and your career as a professional soloist. How did you find your start?

I didn’t really get into music until my freshman year of high school, when my brother auditioned for the school musical and I thought it would be fun to join him. I ended up with the lead role, and four years later, started college as a musical theater major, where a teacher suggested to me that my voice might be better suited for opera. I ended up at the San Francisco Conservatory of Music for my Master’s degree, and completed a postgraduate diploma there and at the Hochschule für Musik in Leipzig, Germany. I started singing professionally while I was still a student, and have sung for operas and orchestras in France, Germany, New York, Colorado, and all over the Bay Area.

Becoming a musician might not have seemed like the most logical path for me. I grew up on a sailboat in Sausalito and spent my childhood circumnavigating with my family, and always thought that I would end up in international business or linguistics. What’s amazing about music, though, is how it expresses different cultures so beautifully and distinctly, and often without any words at all. I think that’s what drew me to this career—the universality of it.  How cool is it that you could be singing an 18th-century opera in Italian, that takes place in Greece, in an opera house in Germany, for people from America, Russia, India, France, etc.? For that period of time everyone is connected through the thrill of the music, and is also connected to the audiences who heard the same music hundreds of years ago!

What other performances have you been a part of recently?

I’m about to leave for a two-week tour of Finland, Sweden, Latvia, and Estonia singing the soprano solo in Brahms’ Requiem, and am also in rehearsals for HMS Pinafore here in San Francisco with Lamplighters Music Theatre. In April, I sang Jane Bennet in the premiere of Kirke Mechem’s new opera Pride & Prejudice, which was a real treat—I love working with living composers and creating new music. I also sang Adina (Donizetti’s L’elisir d’amore) twice this season—but in two different translations!

How did you become involved with Symphonia Caritas and our team at Swords to Plowshares?

I became acquainted with Paul Schrage through the Berkeley Community Chorus & Orchestra, for which he and my husband Eric Choate both conducted. We got to chatting because he was interested in learning more about opera. And here we are!

For folks who are not musicians, it’s not always apparent how much goes into preparing for a single concert like ours. What has that preparation process been like for you and the other professional musicians?

Preparing arias for a concert is a really unique process. Since arias are excerpts from operas, you go through many of the steps of preparing a full operatic role—character development, familiarization with the storyline and relationships, research into the historical context of when and where the opera was created. If it’s in a foreign language—as all of this evening’s arias are—then you need to go through and write it out in the International Phonetic Alphabet (IPA) and write in a translation, so that you know exactly what you’re singing and what it should sound like. And that’s all before you even start to learn the notes themselves, let alone memorize them!

Many of these arias have been in my repertoire for a while. Every opera singer is expected to have what we call an “aria package” of 5-10 arias in various styles and languages that we’re prepared to sing at any time for an audition, competition, or concert. As you establish your career, that number grows, and it’s fun to get to pull out something that you sang years ago and see how it feels different now. For example, I first sang “Mein Herr Marquis” when I was a sophomore in college and had just started singing opera. It’s a lot easier now!

What can concert attendees expect to hear you sing at the concert?

This program is kind of a “chocolate box” of beloved arias from the opera repertoire. Paul and I worked together to come up with arias that I was at least familiar with, that would work well with my voice, and that were crowd-pleasers! For most people, Puccini is probably the most recognizable opera composer (with perhaps the exception of Mozart’s ubiquitous Queen of the Night). He had such a gift for memorable melodies, and I bet you’ll recognize “O min babbino caro,” “Quando m’en vo,” and maybe “Mi chiamano Mimi.”

In what way are these selected pieces indicative of your style and the scope of your repertoire?

Concerts are a fun way to dive into characters that I might not get to sing in a full opera. For example, “Mein Herr Marquis” and “Klänge der Heimat” are sung by two different characters in the same opera (Adele and Rosalinde, respectively, in Die Fledermaus). Similarly, “Quando m’en vo” and “Mi chiamano Mimi” are both from La bohéme, sung by Musetta and Mimi. In both cases, a soprano can never sing both roles at once—except in a concert setting.

I think Juliette (“Je veux vivre”) and Adele’s aria are most indicative of what I’m best suited to sing right now. My voice currently tends toward younger, lighter lyric roles, a bit of coloratura but also a bit of fullness. I often play similar “ingénue” characters in most productions. It’s a little bizarre having your body be your instrument—it changes and develops over time and goes places that you might not expect. For instance, one of my voice teachers was a mezzo-soprano all her life until she had children—then she suddenly gained an upper extension and was a dramatic soprano!

What does it mean to you that your performance will support veterans in the Bay Area community? Why is it important to you to perform in a benefit concert?

I was born in San Francisco and have adored this city all my life. As it has changed and evolved, programs like Swords to Plowshares are increasingly important to make this city livable, affordable, and enjoyable for all kinds of people, especially to veterans who have devoted themselves so completely to protecting the freedoms that make the Bay Area the great place that it is. I’m honored to be even a small part of that mission.

Our sincere thanks to Ellen for joining us as our featured soloist. We welcome others in our mission to serve veterans to restore health, housing, and dignity. Join us for our 2019 Summer Solstice Symphony Concert.