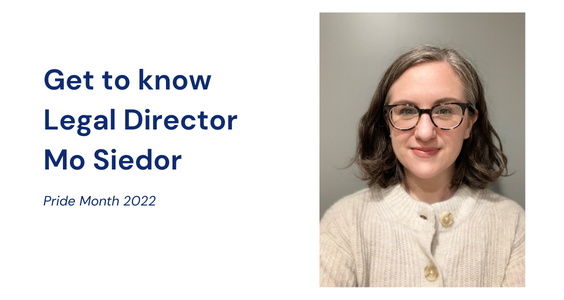 We are excited to amplify the work of our LGBTQ+ staff members, especially in celebration of Pride Month. This year, we are spotlighting our Legal Director Mo Siedor. Since joining the Swords to Plowshares’ Legal Unit in 2014, she continues to spearhead groundbreaking initiatives and supportive tools for underserved veterans, including those in the LGBTQ+ community.

Mo admits that supporting veterans was not what she expected to do after law school. Mo knew that she wanted to focus on serving the public interest with her legal endeavors but had no thought of specializing in veterans' rights. In 2014, she applied as a Pro Bono legal fellow after a law school friend who served on the Swords’ Pro Bono Advisory Board learned of the opening in the Legal Unit.  After serving as a fellow for a year, she was hired as the Pro Bono Manager.

At that time, Mo recalls being one of few queer people in the Legal Unit. She discovered that there were specific issues that LGBTQ+ veterans experienced and noticed Swords was not doing enough to provide targeted support to address things like DD214 record corrections for those kicked out of the service under ‘Don’t Ask, Don’t Tell’ and earlier discriminatory policies. This gap allowed Mo to find an overlap between her personal commitments to support other LGBTQ+ people and her professional mission to advocate for veterans. With support from her colleagues, Mo organized a legal clinic at Glide Memorial Church to assist LGBTQ+ veterans with DD214 corrections. This was the first program of its kind at Swords to Plowshares and was the catalyst for many other similar initiatives, including two self-help guides which Mo wrote in 2017, DD214 Name Corrections for Transgender Veterans and DD214 Corrections for Veterans Discharged Under “Don’t Ask, Don’t Tell” and Prior Policies.

Mo believes her work is an example of why having a diverse staff matters. “It’s crucial to have a variety of experiences and perspectives in order to better understand and therefore better serve our clients,” says Mo. Regarding the LGBTQ+ community, it allows us to make our spaces and programs welcoming to veterans who may feel unsafe to ask for resources. Mo became Legal Director in 2019 and remarks that the legal terrain for LGBTQ+ veterans is still being built. “When ‘Don’t Ask, Don’t Tell’ was repealed there was a directive issued by DOD to correct the military records of those kicked out for being gay,” she explains. “There hasn’t been a comparable directive for trans folks now that they’re allowed to serve in the military - if you need to change your name on your DD214 to your legal name today, the Department of Defense still requires you to prove your risk of discrimination, and make a case that you’re deserving of the correction.” With Mo’s leadership, the Legal Unit advocates for those in need of these corrections and continues to fight on their behalf until that important policy change is made at the Department of Defense.