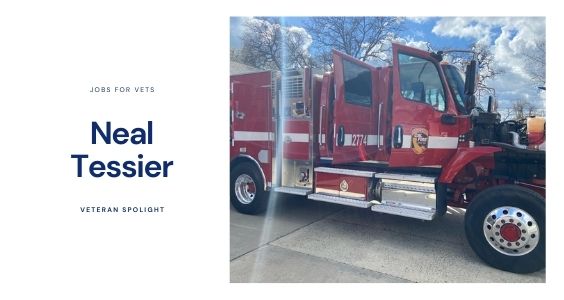 “Starting a career is tough when you’re 40,” Neal Tessier admits. During his transition out of the military, Neal experienced mental health challenges which caused hardships that impacted his economic stability. But Neal does not let his age or mental health struggles hinder his progress into civilian life. With Swords’ support, Neal is able to find a promising career path in firefighting.

Neal served in the U.S. Army from 2009 to 2012 as a Military Police Officer. Neal’s transition out of the military was not smooth. With a wife and a 9-year-old child, he found himself at risk of homelessness and without a reliable income. Most of the work he did after his military service was manual labor, such as gardening and landscaping. Neal realized these gigs were not sustainable for him. Driven by his goal to support his family, Neal became determined to obtain more stable employment.

After Neal arrived at Swords to Plowshares, he worked with his employment specialist to enroll in an Emergency Medical Technician (EMT) program as a steppingstone towards becoming a firefighter through Project Heartbeat’s EMT program in Oakland. Swords to Plowshares sponsored the cost of the program which included tuition, uniform, books, state exams, and other related resources.

In February, Neal successfully completed EMT certification and began the Fire Academy program at the CalFire Training Center in Amador County. In this intensive training, students learn key skills and gain experiences that connect them to local or state fire departments. Neal is currently on track to graduate from the Fire Academy program and looks forward to secure employment. Neal is grateful for the unwavering support he received from Swords staff. He remarks that as an organization, Swords is “a huge help” for veterans in need of career guidance.