Honoring the Veterans Most in Need 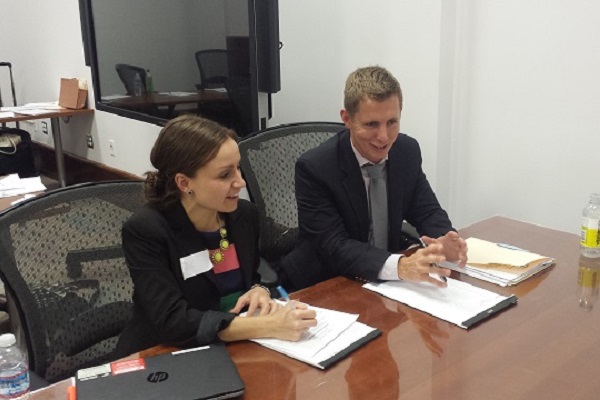 This blog is republished from the original article at the ABA’s Health eSource blog.

It should come as no surprise that Vet Centers hold a special place for many veterans. Stepping into the waiting room of the Vet Center in Oakland, California (OVC), for instance, one is immediately surrounded by veterans’ artwork, invitations to potlucks, the smell of communal coffee, and free guaranteed same-day counseling intake appointments. In other words, it is a warm and inviting space. This atmosphere stands in contrast to the impersonal, clinical feel often associated with traditional health clinics. And this difference is by design. Congress created Vet Centers in 1979 in response to veterans’ desire for community-based alternatives to Department of Veterans Affairs (VA) hospitals for counseling.1

The OVC’s winning attributes have not gone unnoticed. Every weekday, veterans of all ages and from all branches of the military flock to the OVC. They come for individual, family, and group counseling with VA readjustment counselors for help processing the psychological aftereffects of combat or Military Sexual Trauma.2 Some also come to connect with their local veteran community, through activities such as gardening, yoga, and movie nights.

A Medical-Legal Revolution at the OVC

Like the OVC, Vet Centers across the country provide welcoming spaces for recovery from the wounds of war.3 Currently, there are 300 Vet Centers nationwide.4 The OVC is unique among these 300 Centers in a key respect, however: it is the only Vet Center in the country that is home to a Medical-Legal Partnership (MLP).

MLPs are an interdisciplinary model of care that recognizes that many health problems cannot be solved without legal aid.5 Thus, clinicians and lawyers in MLPs work as members of the same team. Lawyers offer aid onsite at health facilities, and clinicians refer patients to these lawyers for help with the legal issues underlying the patients’ ill health.

An oft-cited example of how lawyers and clinicians in MLPs can work together to address the social-determinants of health looks to the intersection of childhood asthma and housing conditions.6 A child might visit his doctor repeatedly for help with chronic asthma, and on her own, the doctor is generally limited to managing the condition. Yet if the doctor is part of an MLP, she will be trained to identify potential legal issues at the root of the child’s asthma, such as mold in the child’s home. Also because of the MLP, the doctor then has the option of referring her patient to a lawyer onsite, who can pursue legal remedies for the substandard housing condition that is harming the child’s health. This is but one example of the various forms and powers of MLPs.7

Notwithstanding the newness of the MLP model, MLPs have already been established at 294 healthcare sites in 41 states, and these numbers are growing rapidly.8 VA MLPs are a large part of this movement. Over 150 VA MLPs and legal clinics are in operation today, providing a range of legal services, including drivers’ license reinstatement, bankruptcy representation, criminal expungement, and estate planning.9 However, aside from the OVC MLP, VA MLPs are based at traditional VA health facilities, such as medical centers and outpatient clinics, which also provide physical health services.10 The OVC MLP’s singular role as the only MLP at a VA Vet Center counseling site positions it as a true trailblazer.

A Look Inside the OVC MLP

The novel MLP at OVC was formed in 2016 between the OVC and Swords to Plowshares (Swords). Swords is a community-based organization that provides legal, employment, and housing assistance to over 3,000 veterans in the California Bay Area every year.11 Prior to starting the MLP, Swords and the OVC had many veteran clients in common, with OVC providing counseling for service-connected mental health disabilities, and Swords representing veterans in claims to access VA benefits for these disabilities. However, the two entities did not have a formal relationship. Partnering more closely as an MLP was a natural next step, and an important one for the veterans the OVC and Swords serve.

The Swords-OVC MLP’s legal services focus on two areas of law vital to veterans: VA benefits and discharge upgrades. A staggering number of service members return to civilian life with disabilities stemming from their service — one estimate finds that 3.8 million veterans have a service-connected disability rating — and this only includes veterans whose disabilities have been recognized by the VA.12 Moreover, hundreds of thousands of Americans who served in the military are not considered “veterans” by the VA due to their discharge statuses — these veterans need help with discharge upgrades.13 Because of the Swords-OVC MLP, veterans who visit the OVC not only have access to counseling; they can also receive free legal aid onsite. The assistance provided through the Swords-OVC MLP ranges from one-time advising on pending VA disability claims to long-term representation on complex discharge upgrade cases.

In keeping with the motivating spirit of Vet Centers, accessing these legal services at the Swords-OVC MLP does not require veterans to navigate a sea of red tape. The beauty of the MLP model is that counselors can refer veterans directly to a lawyer simply by walking down the hall after a therapy session. Moreover, going forward after an initial legal intake, the lawyer and counselor can coordinate schedules with veterans so that they can receive their mental health and legal care during one visit.

The MLP’s collaboration does not end there. OVC counselors can also play a key role in the legal process itself. Based on their general expertise treating veterans with mental health issues, and their particular insight into their own patients, counselors often are qualified to write medical opinions. These opinions can be integral to a veteran’s case. They answer questions central to the VA’s adjudication of mental health disability claims, and to the Department of Defense’s (DOD) disposition of discharge upgrade applications, particularly those based on Post-Traumatic Stress Disorder (PTSD) that went undiagnosed during service. In recognition of the fact that many veterans have been discharged for PTSD symptoms that were mistakenly interpreted as misconduct, in 2014 the DOD issued guidance governing discharge upgrades in these circumstances.14 Under the guidance, when there is evidence that PTSD played a role in the discharge, the DOD must liberally waive filing time limits and involve medical personnel in upgrade determinations.

Chief among the benefits of the Swords-OVC MLP is the direct link between legal aid and veterans with Other Than Honorable discharges. These veterans face serious challenges upon their return to civilian life — as compared to other veterans, they are more likely to be homeless and involved in the criminal justice system, and are at greater risk of suicide.15 They also face barriers to employment because of their discharge status.16 Fortunately, lawyers can address these problems. By helping veterans obtain discharge upgrades, lawyers open the door to life-saving VA benefits, such as subsidized housing and comprehensive healthcare. Moreover, a discharge upgrade removes the stigma of having “bad paper.” This increases employment prospects and income, which in turn improves wellbeing. Put simply, the legal aid provided through the Swords-OVC MLP brings benefits that can enhance both physical and mental health.

The OVC, like other Vet Centers, is the optimal site to build the critical link between lawyers and veterans with Other Than Honorable discharges. To be eligible for care at a Vet Center, a veteran must have served on active duty in combat theater or area of hostility, or have experienced Military Sexual Trauma.17 Discharge status is not taken into account. Elsewhere in the VA healthcare system, however, an Other Than Honorable discharge is likely to be an obstacle to care.18 Eligibility for more comprehensive VA healthcare is contingent on either not having been discharged with “bad paper” or on the VA making a legal determination that the veteran is “honorable for VA purposes” despite his/her discharge status. Such determinations are rare, and often require complex legal argumentation. Accordingly, Vet Centers are essentially the only source of free mental health treatment available to veterans with Other Than Honorable discharges, making them an ideal site for lawyers to connect with this cohort of veterans.

This is also precisely why the MLP model is so well-suited to Vet Centers — these Centers serve the veterans with the most pressing legal needs, who are also hardest to reach. Considering the challenges veterans with Other Than Honorable discharges face, a remote referral relationship, with lawyers and VA clinicians at distant sites, simply does not go far enough. For one, it puts the burden of traveling site-to-site on vulnerable veterans, who may be struggling to afford food and shelter, let alone the cost of frequent transportation. The distance also dampens clinicians’ and lawyers’ ability to collaborate on cases where nuanced medical evidence is decisive.

The OVC and Swords are not alone in their recognition of the need to better serve veterans with Other Than Honorable discharges. Their pioneering MLP is part of a larger growing awareness of this problem. As research has shown, and as the DOD recognized in its abovementioned 2014 discharge upgrade guidance, there is a tragic practice of discharging veterans for perceived misconduct that is actually symptomatic of undiagnosed mental illness.19 These are the veterans most in need of mental healthcare, yet, ironically, because of their discharge status these veterans are not eligible for the medications and psychiatric care to which other veterans have ready access. While Vet Centers are staffed by experienced counselors, psychiatric care is not available.

Clearly, the Swords-OVC MLP cannot fight this part of the battle alone. Although there are MLPs at VA Medical Centers,21 they do not reach many of the veterans most in need of legal aid. The first of its kind, the Swords-OVC MLP should serve as a model for Vet Centers and legal providers across the country. As a society, we owe a great deal to veterans suffering from unjust discharges and to those struggling to obtain their disability benefits. Building MLPs at Vet Centers in order to integrate veterans’ mental health and legal care is a critical step in starting to repay them.

Rose Carmen Goldberg (JD/MPA) is a Skadden Fellow/Staff Attorney at Swords to Plowshares. Prior to joining Swords to Plowshares, Ms. Goldberg worked at the U.S. Court of Appeals for the Third Circuit as a law clerk for Chief Judge Theodore McKee; for the Senate Judiciary Committee on gun control and abortion rights; at the White House on Native American affairs; and at the U.S. Department of Health and Human Services as a Medicare policy and health reform analyst. During law school, Ms. Goldberg was Co-Editor-in-Chief of the Yale Journal of Health Policy, Law, and Ethics and a Coker Fellow in Contract Law. She holds a JD from Yale Law School; an MPA from Columbia University; and a BA from St. John’s College in New Mexico. She can be reached at rose.goldberg@stp-sf.org.