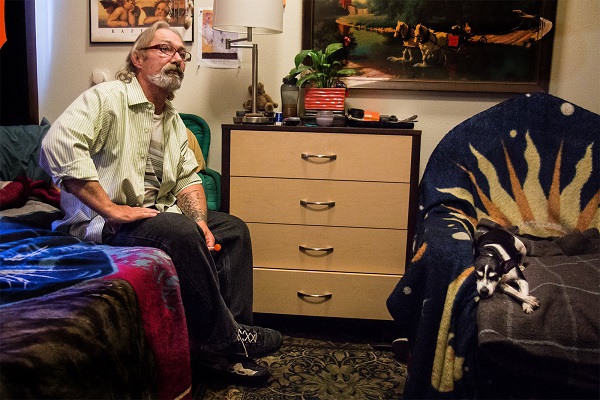 Mission Local - The room is filled with sunlight. Everything looks new and spotless. Victor Fleming sits on a chair eating an orange lollipop and looks at his dog. It's been a little more than seven months since he moved into 150 Otis, known as Veterans Commons, a once rundown city-owned building that was transformed into a housing complex with services for homeless veterans. And he loves it.

"It's fantastic. It doesn't get any better," he says.

He became homeless soon after he left the service. He suffered from post-traumatic stress disorder, but that wasn't the reason he started living on the street, he says."I self-medicated for 30 years. You can't be alcoholic and have a job. I abandoned my family and everything. It was really easy for me to be on the street," Fleming says.Fleming says that in addition to having a drinking problem, he abused narcotics.Two years ago, while he was on his way to Santa Rosa, where his son lives, his car broke down. "It was a turning point. I thought, "

What am I gonna do?'" He went to San Francisco and found himself on the street again.Until one year ago, Fleming lived in a shared space at the Next Door Shelter on Polk Street and Geary Avenue, in the Tenderloin."The normal stay is 90 days, but I stayed longer," he says. "If you are doing something positive with your life and trying to improve your situation, they help you."That's where he found out about the new complex that was being developed by Swords to Plowshares, a non-profit veteran service organization, in partnership with Chinatown Community Development Center. He now lives in a small studio decorated with a San Francisco Giants flag.

"I was one of the first people who filled an application," he says. "And literally the second person to move in."

‍Fleming is one of 75 chronically homeless and disabled veterans who lives in the building, which opened in November 2012. The building was a historic site owned by the City and had been used as a storage facility for years. The project took six years and cost approximately $30 million, which came from state, federal, city and donation funds.

"If you are doing something positive with your life and trying to improve your situation, they help you."

A resident's rent is paid, at least in part, by vouchers from the Veterans Affairs Supportive Housing program. The exact amount varies from case to case. Fleming's studio at Veterans Commons costs one third of his income - $1,800. The voucher covers two thirds of the rent, and he pays the rest.

The residents sign one-year leases that can get renewed.

"A lot of people will live here until they die," said Colleen Corliss, resource development and communications director of Swords to Plowshares.

There are people here who have issues, and we have all kinds of ways to help people with those issues," Fleming says as a woman enters the room and starts screaming at the three people sitting in the common area.

Fleming struggled with addiction for three decades and lived on and off the street during that time. His relationship with his family was not always good.At Veterans Commons, Fleming receives counseling that helps him repair frayed family ties " he got help organizing a trip to visit his mother, and learned how to plan activities to welcome his son when he came to visit. Besides psychological assistance, residents learn real-world skills " such as how to open a bank account.Having these resources is crucial for Fleming.

"A lot of us don't have the best social skills when it comes to doing normal things. Now we get all this help. It blows my mind," Fleming says."We are the type of people who don't ask for help," he says.

Fleming walks back to his studio, where he keeps photos of the inauguration of the complex. "Veteran Commons has done a lot for me. I can't praise them enough,"� he says.It's difficult to determine the exact number of veterans who are homeless because veteran status is not always listed in homelessness polls. Swords to Plowshares sees approximately 2,000 people a year, but not all are homeless.In San Francisco, there are 500 Veterans Affairs Supportive Housing vouchers that help homeless veterans pay for housing. The City is hoping to obtain 70 more, says Bevan Dufty, director of HOPE (Housing Opportunity, Partnerships and Engagement).

‍Nine blocks down on Mission Street, another veteran housing program opened in February.Since then, 33 residents have gradually moved into the former Elements Hostel at 2524 Mission Street. The building, owned by developer Gus Murad, includes 31 studios and two one-bedroom apartments. It's adjacent to Lolinda and El Techo de Lolinda, a restaurant and a rooftop bar.

Murad declined to talk about the project, but according to Dufty, the owner approached the City with the idea.The transformation from hostel rooms to studios was easy. The only issues that came up were minor, Dufty said. They included trying to find a way for the veterans to receive mail individually, and replacing key cards with locks on doors.

So far, the restaurant and the veterans housing facility have coexisted smoothly. Both areas share an entrance where customers of the bar and restaurant wait in line in the evenings."From what we have seen so far, [the supportive housing program] is very effective," said Larry Del Carlo, CEO of Mission Housing Development Corporation.The challenge, according to both Del Carlo and Dufty, is to find more available units in the city.